Below is our recent interview with John Michel, Executive Director of Skyworks Aeronautics:

Q: Could you provide our readers with a brief introduction to Skyworks Aeronautics?

A: Skyworks Aeronautics is the world leader in the science and technology of gyronautics, focusing on the design and development of high-performance gyroplanes. Using highly advanced technology and modern aerospace science, engineering, and design methods, we strive to make air travel safer, more cost-efficient and effective.

Skyworks Aeronautics has been developing manned and unmanned vertical lift gyroplane technologies for more than two decades. These advanced sustained autorotative flight technologies enable aircraft to be both runway independent and economical, and yet remain unconstrained by the physics-imposed speed, range, and payload limitations of a helicopter. After 25 years of research and development and more than 40 patents issued and more under application, Skyworks Aeronautics is the undisputed global leader in gyronautics — the science of safety, simplicity, and sustainability applied practically to change the way people and goods move about the globe. 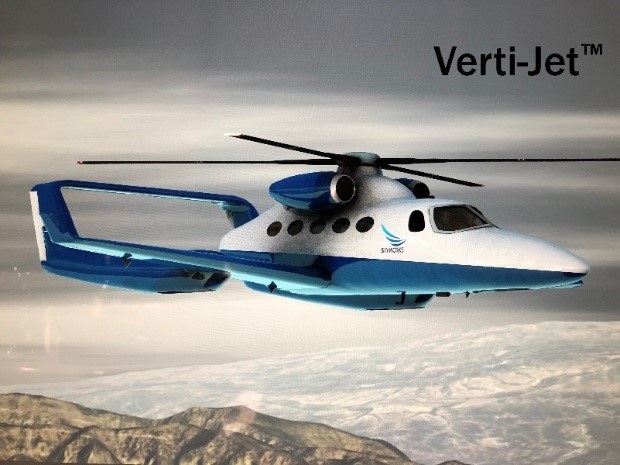 A: Skyworks Aeronautics will use the funds to move forward with the commercialization of three of its unique gyroplane aircraft: The eGyro electric air taxi geared towards urban air mobility; the 400 mph VertiJet, which will be the world’s first VTOL business jet; and the Hawk 5 versatile performance gyro which is primarily targeted to emerging nations in dire need of affordable, reliable and versatile vertical lift alternatives to costly and complex helicopters. It is important to note the Hawk 5 is already being manufactured with our Serbia based engineering team, with first flight slated for late 2021.

Q: Can you give us more insights into your technology and patents?

A: As briefly mentioned earlier, Skyworks Aeronautics is the world leader in gyronautics, with well over 40 patents secured. The core of Skyworks’ technology is sustained autorotative flight. Autorotation is the ability of a free-spinning rotor to generate lift. For a Gyroplane in forward flight, as shown in the diagram below, the unpowered rotor creates lift through autorotation, with forward thrust provided by an engine-driven propeller(s) or by jet engine(s), much like an airplane. Larger and/or faster Skyworks Aeronautics Gyroplanes have airplane wings. 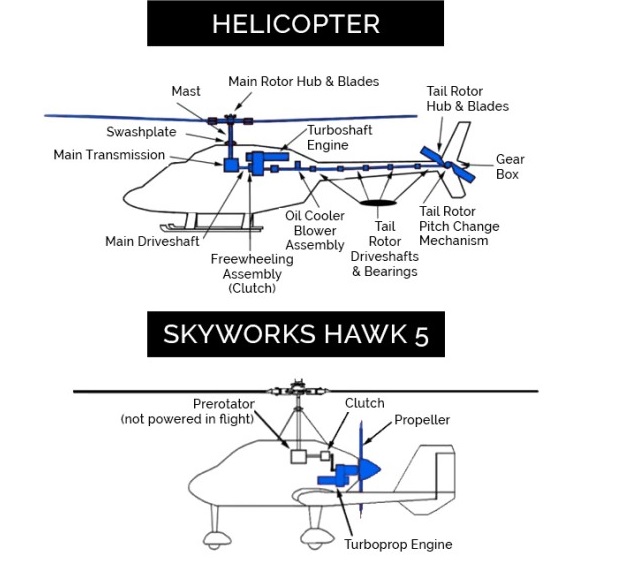 A: In simplest terms, the inherent versatility and scalability of this technology, which when coupled with the unmatched reliability, affordability, and sustainability of gyrocraft in general, makes our family of capabilities truly transformative.

Tell us more about the VertiJet

A recently released ten-year industry forecast by Honeywell Aerospace of the business jet industry, anticipates sales for business jets could reach almost 9,000 aircraft deliveries, representing over $271bn in total dollar value. Of this demand, over 25% of sales will be very light business jets.

Very light jets are increasingly popular because of their affordability (prices for new aircraft usually range between $3M-$8M) and because of their inherent agility in allowing access to smaller airports with shorter runways. In the U.S. alone, that opens up over 5,000 airports for business travel. What’s more, in addition to being very cost efficient to support and fly, very light business jets still deliver speed (over 400 mph) and travel flexibility (range of 1,000+ miles for 4-6 passengers).

In an age where time is the most valued commodity, every minute saved for business executives, industry consultants, lawyers, doctors, and scores of other highly compensated professionals, matters.

Now imagine if the aviation industry were introduced to a very light business jet that could achieve all the above, while eliminating airports and runways all-together. Imagine the score of possibilities if you could take off from a tennis court. Well, thanks to Skyworks innovative new VertiJet, everything from parking lots to yacht decks, to backyards can be transformed into launch pads to get busy people moving smartly, safely, and conveniently.

The VertiJet™ is a runway independent business jet that will take-off and land vertically like a helicopter. Leveraging technology from the British Rotodyne and the DARPA Heliplane programs, VertiJet has an estimated top speed of 400 mph and a range of at least 1000 nm, while elegantly blending the cabin configuration and comforts of a modern bizjet with the ability to operate from helipad-sized improved or unimproved surfaces. All with the fundamentally safe flight of a gyroplane and the simplicity, stability, and low operating cost of a fixed wing aircraft.

A derivative of the highly touted DARPA Heliplane, the VertiJet adapts the Heliplane technology for the civil bizjet market. Employing new approaches to noise reduction to enable vertical operations in noise-sensitive areas, VertiJet’s unique design elements reduces the complexity normally associated with rotary wing aircraft while offering the extraordinary performance potential of both the Rotodyne and the Heliplane.

In technological terms, VertiJet is a slowed rotor compound aircraft that can fly as a fixed wing aircraft, a gyroplane, a helicopter, or a combination of the three configurations. In cruise, VertiJet uses a conventional fixed-wing for lift and turbofan or turboprop engines for propulsion and is controlled in flight with traditional fixed-wing aircraft controls and pilot skills. When a runway is available, VertiJet can take-off and land like a conventional aircraft. In the absence of a runway, VertiJet can take-off and land like a gyroplane – with an unpowered rotor, or like a helicopter – with a rotor powered by tipjets that operate for very short periods during vertical operations. VertiJet™ can hover like a helicopter in or out of ground effect. All of this without the complexity of a helicopter’s transmission or anti-torque system.

In sum, VertiJet’s versatility creates an unmatched range of operating conditions for private or commercial operators with an aircraft that can morph into multiple configurations and at a cost point that is a fraction of a similarly sized helicopters. Faster, safer, and less expensive to operate than a helicopter – VertiJet™ is poised to disrupt the bizjet and helicopter markets.

Q: What can we expect from Skyworks Aeronautics in next 6 months? What are your plans?

A: A great deal. Specifically, we intend to accelerate manufacturing of our Hawk 5 aircraft; launch the development of a flying prototype of the VertiJet and finalize our design studies and formalize our way forward in developing the e-gyro. We are excited to play a dominant role in transforming the urban air mobility ecosystem.